After building my Kingcraft Pitts S-2B biplane, I had need to make some incidence measurements.  Because she failed to take off on her maiden flight, I wanted to make sure that wing incidence was set right.  I came across this thread which provided some insight as to why she didn't take off.  As I further explored the internet, I realized that incidence measurements could be expressed differently depending on what aircraft element was being used as the zero degree reference point.

I made my measurements using the "turtle deck" as the zero degree reference and set it to level by placing blocks under the tail wheel.  I then measured the incidence of the top wing, bottom wing and horizontal stabilizer using the "turtle deck" (or longitudinal axis) as my zero degree reference.  These are my measurements:
I thought it was strange to have negative incidence on the top wing with reference to the longitudinal axis, but I found in researching the subject that some biplanes are designed to have negative incidence to replace the washout at the wing tips of mono-wing planes.  Some aircraft designers use the main wing as their zero degree reference.  I've always used either the horizontal stabilizer or the "turtle deck" as my reference point.  I found it hard to visualize any measurements taken from reference points other than the horizontal stab or turtle deck.  It was making me crazy, so I wrote a simple spreadsheet that I think makes it easier.  It takes a set of incidence measurements (referenced to the longitudinal axis) and expresses them from either the horizontal stab, top wing or bottom wing.  You are welcome to download the SPREADSHEET.
Here is a screenshot from the spreadsheet: 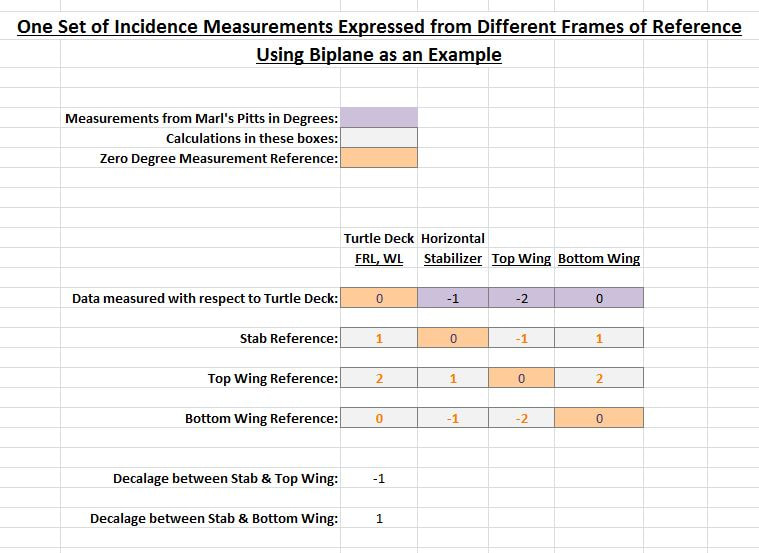